On the Platform page, you can select which versions of Windows your installer should support. 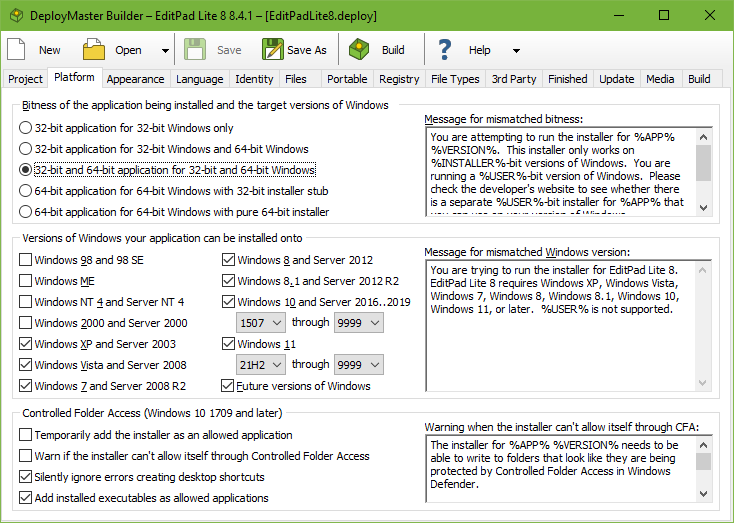 64-bit application for 64-bit Windows with pure 64-bit installer: Choose this option if your application requires 64-bit Windows and you want your installer to support future versions of 64-bit Windows that may not be capable of running 32-bit software at all, or on servers where the administrator has disabled the WOW64 subsystem for running 32-bit applications. A system error message will be shown when the user runs the installer on 32-bit Windows. This error message will be cryptic, saying the setup.exe is not a valid executable, or simply “access denied”, depending on which version of Windows the user is running. This option is recommended for 64-bit server software that people won’t attempt to install on 32-bit machines.

DeployMaster allows you to build a single installer that correctly installs your software on all versions of Windows since 1998. But your application may not support all those versions of Windows. Deselect the versions of Windows that your installer should not support. When the user runs your installer on a version of Windows that you’ve chosen not to support, it will show a message box with the message for mismatched Windows version. You can use several placeholders in this message. %APP% represents the application name you’ve specified on the Project page. %INSTALLER% is replaced with a slash-delimited list of the Windows versions your installer supports, e.g. “Windows 7/8/8.1/10/11”. %USER% is replaced with the version of Windows your user is running, e.g. “Windows 11”.

Windows 10 version 1709 (Fall Creators Update) added a new feature to Windows Defender called Controlled Folder Access. It is disabled by default. It can be enabled via the Virus & Threat Protection settings in Windows Defender. Since Windows 10 version 1803 (April 2018 Update) this setting is labeled ransomware protection. If enabled this prevents applications from writing to folders that are normally used to store personal files. That includes the Desktop and Documents folders. Additional folders can be added to the protection list. The standard folders cannot be removed from it. Even applications such as installers that run with Administrator privileges are blocked by Controlled Folder Access. If an application is to write to the Desktop and Documents folders, then it has to be added to the list of applications allowed through Controlled Folder Access.

The installer does not get Administrator privileges when installing for the current user without admin rights and when creating a portable installation. Then it cannot add itself or any other applications to the applications allowed through Controlled Folder Access. It will silently ignore the options to add itself and any installed executables as allowed applications.

Again, this will only work when your installer runs with Administrator privileges. If the ability to save files in personal data folders is critical to your application, you may want to have it verify this ability on its own. When using the Win32 API, calling CreateFile() to create a file that does not yet exist in a folder that does exist fails and GetLastError() returns ERROR_FILE_NOT_FOUND if that folder is protected by Controlled Folder Access and your application is not allowed through.